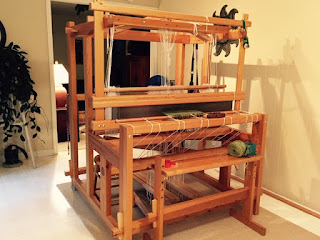 I've had many chapters in my life including having lived in 6 different states around the country.  I have been a photographer, a harpist, a piano teacher, a real estate broker, a hospice volunteer and the co-owner of The Weaver's Studio in Charlotte, NC during most of the 90's.  One thing that has been a constant thread throughout my life is FIBRE and COLOUR!  I was always thrilled, and still am, with a new box of crayons, colored pencils, paint or any luscious yarn or fabric I could lay my hands on!  COLOUR makes me sing and automatically boosts my spirits!

I learned to knit when I was 10 after wanting to emulate my aunt's abilities.  I bought a book, some blue aluminum straight needles and 1 skein of yellow yarn, which I didn't know I had to wind before using.  I immediately had a 25 foot snarl of yarn across the living and dining room floors and after much avail, I had to give up trying to untangle the mess.  Undaunted, I bought another skein with my allowance and began the process of learning.  I taught myself to knit continental even though I was left handed, because I didn't have help.  Later in life when I was going to teach knitting in my store, I had to learn how to knit right handed as well to give students an option.  Now I knit at night and weave in the day....my favorite type of knitting is 2 handed fairisle, holding one color in the right and another color in the left hand.

My intro to weaving came when living in Atlanta.  I spent an afternoon with fiber artist and hand weaver Dianne Totten whose work is known around the country.  She teaches various techniques to weavers and has been featured in several magazines. Our daughters were close friends.  Although I was already obsessed with yarn and knitting, she was opening a new door into the world of weaving for me.  I helped her thread or "dress" her loom and that day ultimately sparked the next experience when I moved to North Carolina.

In the late 1980's I strolled past a store window in Davidson, NC and stopped dead in my tracks to stare at a large floor loom, just inside the door.  The studio was owned by Josephine Morgan, MFA.  In the next year she moved to a larger space and taught weaving. I became one of her first students in that new space, then an employee and ultimately her business partner.  We moved to a larger location in uptown Charlotte in the early 90s where we taught knitting and weaving in the shop.  She was my mentor and dear friend.  Although she has passed, I miss her greatly and think of her almost every time I sit down at one of my two looms.

I have a 48 inch Swedish Glimakra in my kitchen that takes up a 6' x 6' area. I opted for that instead of a kitchen table in that space.  I actually even designed a former custom built home around where this loom would go!  Having it in full view most of the time is more incentive to use it daily!  And I do!  Since it's a focal point in the main living area, I never leave it very long without a warp attached.  I weave mostly scarves and some shawls but am working toward more wearable clothing like ruanas and ponchos.  On my second loom, a 36" Schacht Mighty Wolf,  I'm planning  pillow tops and  some wall art pieces.

If you love COLOURS and TEXTILES as much as I do, you can follow me on this site to either purchase what I post is available or you can commission a scarf in your favorite palette.  Since I don't buy large quantities of each colour yarn, my scarves are one of a kind with varied combinations of warp and weft. Since they're mostly hand dyed fibres, no two scarves are exactly alike. From beginning to end. (from winding skeins, to winding warps, threading the loom or tying on hundreds of single threads, then weaving, cutting off the loom, hemstitching, washing, drying and a final finishing cut to the fringe), my process takes 3 days for one scarf.  I enjoy all the steps of the process and listen to many audible books as I work.

Jani Wovens is a great place to find that gift for a special someone or to treat yourself with a splash of your favorite color! One of a kind woven wear!

Company Overview:
Created on my loom at home in my kitchen with views of colourful fibers in every room.

Thank you for taking time to learn about my passion and my business!  Put more COLOUR! in your life! 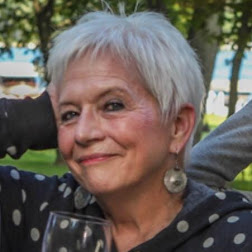